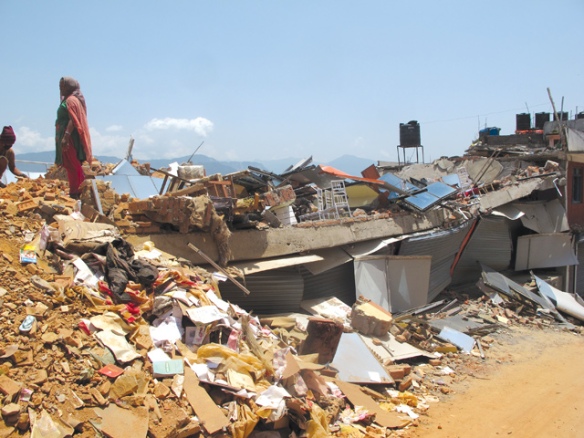 Nepal faces a lot of challenges, not least of which is rebuilding after the earthquakes of 2015. Add to that the very long, ongoing political transition and, as of last week, disastrous flooding in the south.

So, I often ask myself: how fair it is to criticise one of the world’s poorest countries for progressing so slowly on certain issues? (And reminding myself that Nepal has made great strides in some areas, such as the health of mothers and newborns). This may be one of those questions that I’ll never answer satisfactorily and for now I’ll fall back on the opinions of others.

Concerning post-earthquake recovery, here’s what an expert at The Asia Foundation (TAF) told me earlier this month: “The shelter and housing situation is improving but there is still a long way to go and progress has been slower than that following many other disasters in the region… There are some areas where progress has been particularly slow.”

(You can read the full article in Nepali Times).

Most people whose houses were destroyed or suffered major damage still hadn’t started rebuilding when TAF did its last survey of survivors in April 2017. And 23% of households in the 11 earthquake-affected districts were still living in temporary shelters. Astounding!

There were some positive results. For instance, 62% of people in the most-affected districts reported living in temporary shelters, compared to 71% in September 2016. Also, the new head of the reconstruction authority (who was its first CEO but was quickly ousted in a political manoeuvre) seems to be making better progress.

By the way, kudos to TAF for continuing to conduct these regular surveys more than two years after the earthquakes: I imagine the results will be useful for post-disaster planning far beyond Nepal.