“The needs of these indigenous people are converging with the wider environmental needs to protect these areas.” 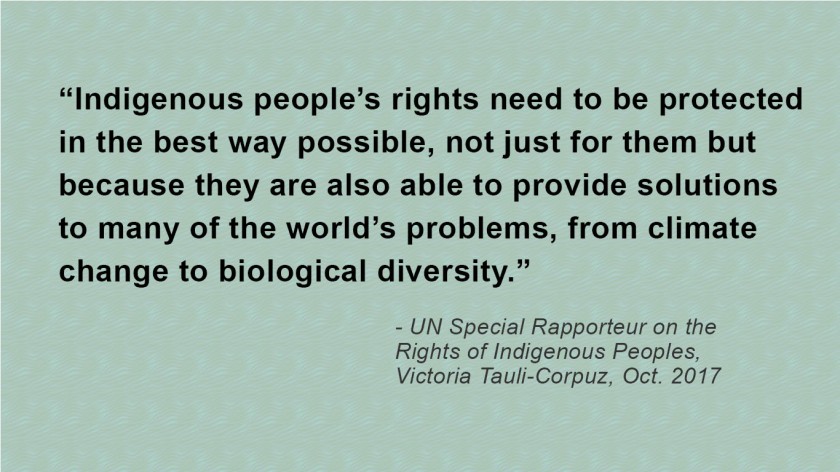 This a follow-up to my last post, where I took issue with an argument in a recent op-ed in the New York Times by Kenan Malik. He contended that the common claim that Indigenous People have a “special attachment to the land and a unique form of ecological wisdom” is the flip side of the historical argument that they are primitives who cannot adapt in the modern world. He calls it a “reworking of the ‘noble savage’ myth.”

In my experience, Indigenous Peoples are – in general, certainly not every individual or group – closer to the land. Some, especially in the Third World, still make their livelihoods primarily from the natural world, many others feel a spiritual bond to it. As is being constantly pointed out, knowledge of the environment that many Indigenous Peoples possess could be an important asset in helping the world understand, and adapt to, climate change.

I missed a core point though: that simply by safeguarding their lands, Indigenous Peoples are protecting millions of hectares of forests that act as the earth’s lungs. That is the argument made by UN Special Rapporteur on the Rights of Indigenous Peoples, Victoria Tauli-Corpuz.

“They are the most effective stewards of these key areas,” said Tauli-Corpuz, according to an article in Sunday’s Guardian newspaper. “The needs of these indigenous people are converging with the wider environmental needs to protect these areas.”

“Indigenous people’s rights need to be protected in the best way possible, not just for them but because they are also able to provide solutions to many of the world’s problems from climate change to biological diversity,” she added.

Tauli-Corpuz was speaking at the official launch of the International Land and Forest Tenure Facility.

The organisation is “dedicated to scaling up recognition of collective land and forest rights globally. This helps reduce conflict and further the achievement of global human rights, environment, and development goals,” says the Facility’s website.

I am a husband and father communicating to change the world. I write, edit and podcast, mostly about health and human rights. Canada and Nepal. https://linktr.ee/martydlogan View all posts by Marty Logan