Nepal is lobbying for a seat on the UN human rights council but experts want it to first improve its record at home. 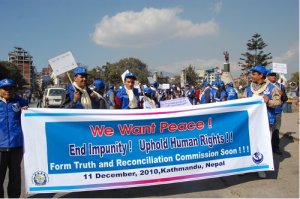 The consensus among human rights experts who I interviewed recently is that Nepal should fix its own human rights record before bidding for a seat on the United Nations human rights council—or at least do both simultaneously.

“The National Human Rights Commission believes the government should act on other issues before focusing on a seat on the HRC,” says the Commission’s Mohna Ansari. “For example, it needs to investigate recent killings of Madhesi people, implement the NHRC’s recommendations and give the commission control over its budget.”

Frederick Rawski, Asia-Pacific Regional Director  for the International Commission of Jurists, told Nepali Times: “The UN General Assembly has made it clear that members elected to the Human Rights Council must uphold the highest standards in the promotion and protection of human rights. So the best thing that the Nepal government could do to strengthen its candidacy would be to take immediate steps to improve its own human rights record.”

I am a husband and father communicating to change the world. I write, edit and podcast, mostly about health and human rights. Canada and Nepal. https://linktr.ee/martydlogan View all posts by Marty Logan