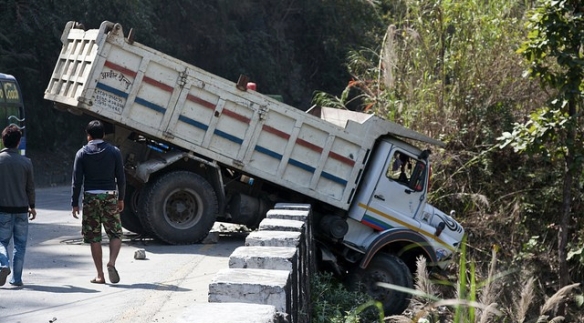 This has bothered me for a long time, and just Tweeting about it to my *massive* following (@martydlogan) hasn’t had any impact to date, so I’m writing this post. To be clear, I’m not doing this to ‘make fun’ of anyone’s English. In fact, I don’t think this is a case of using words unintentionally but that the words chosen reflect a cultural trait (the power of ‘fate’ in Nepal) but I’ll leave that research to interested experts.

The daily media in Nepal* continually reports about “ill-fated” road accidents, or that a vehicle “met with an accident”. The connotation is that the crash was inevitable or, in the second phrase, that the accident itself was actually the actor in the incident. This is rubbish, and I hope this style of writing will change soon because I believe that reporting the real causes of the carnage on Nepal’s roads would be one positive step in reducing it. Below I’ve laid out some reporting examples, but first here’s why this matters:

Police records blame 95% of accidents in Nepal on negligence of drivers. Mechanical failure, poor road condition, careless pedestrians and bad weather accounted for the rest. However, even though over-speeding, over-loading are major causes, the number of accidents caused by poor road maintenance, and the presence of animals and pedestrians on highways are probably under-reported…

There is no effort to enforcing and implementing existing laws to ensure safety, and none of the officials interviewed for this article appeared to recognise that the rising number of road traffic accidents was a national emergency that needed a strategy for mitigation.

As mentioned above, here are examples of reporting in Nepal’s daily English media. These are all  from 13 March 2019:

While the following excerpt from an article in Republica includes the phrases that I mentioned at the start of the article, at least it suggests an actual cause for the crash:

Two people died and 22 others were injured when a bus carrying wedding attendants fell off a cliff at Dharampani in Makwanpurgadhi Rural Municipality-2 on Tuesday. Overspeeding has been blamed for the accident.
The ill-fated bus (Ba 4 Kha 2217) en route to Hetauda from Bhaktapur was carrying 28 wedding guests when it met with an accident in the newly-blacktopped Kanti Highway at Dharampani.

A bus carrying wedding guests swerved off the road and plunged 20 metres at Shikhar Kateria along the Kanti Highway in Makwanpur district on Tuesday, killing two persons and injuring 17 others.

And later in the same article:

In Salyan, two persons died when a speeding tractor skidded off the road and plunged some 15 metres…

Unfortunately, The Himalayan Times gets it all wrong:

Two persons were killed and 22 others injured when a bus carrying wedding attendants met with an accident in Chainpur of Makawanpurgadi Rural Municipality, Makwanpur, on Tuesday. The bus bound for Hetauda from Bhaktapur via Kantilokpath had falled 20 metres…

I did a quick Google search and some research has been done on how media reports about accidents. WHO has also led various initiatives to make journalists more aware of the impact – on individuals, families, communities and societies as a whole – these incidents.