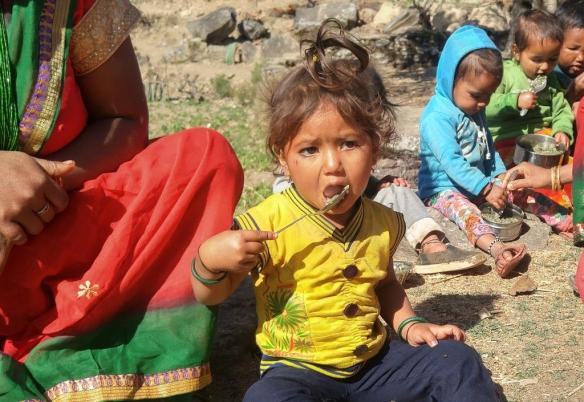 A child eating at a Mother’s Group meeting devoted to nutritious feeding, in Nepal’s Achham district in 2018. Photo: Marty Logan

A study finding that infants in Kathmandu are getting 25% of their calories from junk foods was a major talking point in Nepal last week.

Looking at the article in The Journal of Nutrition, it is also surprising that among the 700 or so kids studied, the group who ate the most junk food were shorter than the average, not fatter as might be expected.

Shorter than average is a description of stunting, a major marker of childhood malnutrition. Decades ago Nepal had extremely high rates of stunting, which is also an indicator of a country’s development, but managed to reduce it greatly. Still, the country is not on track to meet the 2030 target of the Sustainable Development Goals: 15% of children under 5 stunted.

Below is my article published today in Nepali Times, online.

Surprisingly, infants raised on biscuits and noodles are shorter than expected, not fatter

The publication of a paper last week in The Journal of Nutrition that infants in Kathmandu were getting 25% of their calories from junk food shocked many. But what is even more worrying is that instead of being fat, those who consumed the most junk food were shorter than average.

Stunting is a vital measure of malnutrition. It is also one of the indicators used to track a country’s path to development. Infants who are short for their age can have impaired brain development and increase the risk of developing nutrition-related chronic diseases such as diabetes, hypertension and obesity. Its causes include poor access to nutrient-dense foods and lack of dietary diversity.

Nepal has done well at reducing stunting in recent years, cutting it from 57% in 1996 to 36% in 2016. However, the country is still not on track to reach the World Health Assembly stunting target of 24% by 2025, or the Sustainable Development Goal target of 15%.

‘Our results suggest that rapidly changing food environments and subsequent dietary patterns in LMICs (low and mid-income countries) might curtail recent achievements in the reduction of childhood stunting,’

‘The current average annual rate of reduction of stunting needs to accelerate to meet these targets,’ points out a 2018 report of Nepal’s National Planning Commission, Towards Zero Hunger. ‘Addressing inadequate maternal, infant and young child feeding practices, untreated episodes of acute malnutrition, infections, and deficiencies in micronutrients, all of which constitute immediate and underlying causes of stunting in Nepal, is of critical importance.’

Looking at the findings of the recent study published in The Journal of Nutrition carried out by Helen Keller International, raises the question of whether growing junk food consumption is contributing to the proportion of stunted children not going down.

‘Our results suggest that rapidly changing food environments and subsequent dietary patterns in LMICs (low and mid-income countries) might curtail recent achievements in the reduction of childhood stunting,’ says the The Journal of Nutrition study.

However, the researchers, from Helen Keller International and the London School of Hygiene and Tropical Medicine, note that their results do not prove a direct link between eating junk food and the children’s growth but ‘present a plausible biological pathway for this relationship’.

The survey, which set out to study links between junk food consumption and nutritional health, looked at 700+ children aged 12-23 months, in Kathmandu Valley. The group that consumed the most unhealthy food and beverages – excluding breast milk – got nearly half (46.9%) of their total calories from those items, compared to 5.2% for the group that ate the least.

Researchers found that those who ate most junk food were at risk of having inadequate levels of eight nutrients: calcium, zinc, vitamin A, thiamin, riboflavin, vitamin B-6, vitamin B-12, and folate. ‘Our dietary results suggest that 1–2-year-old children living in the Kathmandu Valley are at high risk of multiple micronutrient deficiencies, which are further exacerbated by high intakes’ of junk food, the report concluded.

The study also warned about other long-term impact of eating junk food: ‘In Nepal, the prevalence of adult obesity and diabetes is increasing, which indicates that these unhealthy eating patterns in young urban Nepali children urgently need to be addressed.’

Researchers noted that although some of the junk foods had been fortified, the high amounts of sugar and sodium that were also added to the processed foods made them overall unhealthier.

Read the article on Nepali Times.

1 thought on “Shorter, not fatter”