Nepal has taken on the huge challenge of feeding every one of its students up to grade 5 one hot meal a day. The people are committed but can the government deliver?

I recently received a fellowship to report about nutrition and chose to focus on school feeding, mainly in Nepal (links below).

About five years ago the government decided to invest heavily in the programme and in the following four years its investment in school meals almost quadrupled.

For decades, the UN World Food Programme (WFP) has been providing school meals to kids in the poorest parts of the country and slowly the government started running its own programme in other districts. Today, WFP is feeding kids at school in just six districts, with half of the cost paid by the government. By 2024, the ministry of education will be running the operation country-wide.

I have no doubt that the programme can be effective. Although the schools I visited were obviously chosen so I would see positive examples and don’t represent the reality across Nepal, I believe that most parents, teachers and local governments (who transfer the money from the central government to the schools) are committed to making it work.

I believe that most parents, teachers and local governments are committed to making it work.

Yes, no doubt there is corruption — abetted by the fact that officials in Kathmandu have not yet provided programme guidelines — but I choose to believe it happens in a small minority of cases.

That said, the challenges are immense. The government provides just 15 rupees (0.12 $US) per child per meal to prepare food that must meet daily nutrition needs, an amount that WFP Nepal affirms is adequate (for the food only, but perhaps insufficient to cover associated transport, cooking, and equipment costs). But one NGO in Kathmandu that is feeding kids in schools in two municipalities says it’s actually spending 30 rupees per meal, albeit to cover all of its costs.

The central government has also committed to what’s known as homegrown school feeding. This approach stipulates that schools should source their food from local farmers. I saw this working in Kailali district, in the fertile western plains region, in part thanks to assistance from WFP. But in some hill and mountain areas this just won’t be possible because of seasonal constraints. How will the programme compensate for this?

WFP Nepal says it’s committed to working with the government after 2024, including to approach donors for funding. Such multilateral assistance will be key if the programme is to succeed. Just as important will be effective management, including monitoring, from the government.

Late last year I returned to Chimling Village in Sindhupalchowk district, in Nepal, to follow up on maternal health issues. I was impressed and disappointed at the same time.

Late last year I returned to Chimling Village in Nepal’s Sindhupalchowk district to follow up on maternal health issues. I was impressed and disappointed at the same time.

I first visited the cluster of tiny cement houses at the top of a steep, rocky and rutted dirt road in March 2021. My goal was to trace an essential drug called misoprostol, which is used to stop bleeding after birth (also known as post-partum haemorrhage). There was a major shortage of the drug in 2020, so Nepal’s Ministry of Health had requested help from the international community.

END_OF_DOCUMENT_TOKEN_TO_BE_REPLACED

Nepal and India are just two of many countries fighting successfully to recover sacred objects stolen from temples and displayed in museums and galleries worldwide.

I have lived in Nepal for more than a decade but it’s only in the last couple of years that I noticed the movement to have cultural objects that were looted over the years returned from museums, galleries and other collections around the world.

It reminded me of the North American campaign by Indigenous peoples to have their ancestors’ remains repatriated from the world’s museums. The Haida people living on the Pacific coast of Canada have been particularly active, and successful.

END_OF_DOCUMENT_TOKEN_TO_BE_REPLACED

Almost one year ago, in January 2021, the Government of Nepal updated the country’s rape law. The changes were incomplete, partly because agreed revisions like widening the definition to include men and boys as victims were deleted at the last minute, but it was an improvement.

Changes that were agreed included increasing jail time for those found guilty and criminalizing any attempts to ‘settle’ a rape case outside of the courts, which is a regular occurrence.

END_OF_DOCUMENT_TOKEN_TO_BE_REPLACED

The right to health in Nepal during Covid-19 remains largely a paper promise. In June I wrote about how the government had largely ignored orders from the Supreme Court to act immediately to meet its health commitments in both international and domestic law.

Today the International Commission of Jurists, whose 2020 briefing paper was the centre point of my article, released an updated version—it is equally depressing.

END_OF_DOCUMENT_TOKEN_TO_BE_REPLACED

A couple of decades ago Nepal was a world leader in fighting nutrition, especially stunting (low height for age). Can it regain that position in time to reach targets in 2025 and 2030?

A white-coated nurse holding a blue and white, half-litre bag of milk stands in front of a small group of mothers seated near the entrance of the Nutrition Rehabilitation Home in Kathmandu.

She is explaining the importance of feeding milk to their children, who are lolling on their mothers’ laps. On a table behind the nurse are containers of pulses and legumes and leaning against the wall, charts displaying leafy vegetables.

But later, listening to the women’s stories, it is apparent that solving their children’s problems will require more than a healthy diet. Through tears, Chandra, 24, says she brought her son Raju, 21 months, to the Home after a routine hospital check-up found that he was malnourished.

END_OF_DOCUMENT_TOKEN_TO_BE_REPLACED

It’s not simply that the snow and glaciers on the Hindu Kush Himalaya mountains are melting: they supply water to 3 billion people in Asia. What will they drink when the mountains, also known as the Third Pole, are dry?

And what will happen to the 240 million people who live in the HKH, which stretch from Afghanistan to Myanmar and tower over eight countries in total, including Nepal?

END_OF_DOCUMENT_TOKEN_TO_BE_REPLACED

This is a short post to announce that I’m hosting a new podcast, Strive, by IPS News. It is similar to Nepal Now, a podcast I created one year ago, but with a global vision.

Our first episode, about a civil-society led campaign to boost mask wearing to fight Covid-19 in South Asia, is online and more will soon follow.

END_OF_DOCUMENT_TOKEN_TO_BE_REPLACED

I really appreciated this editorial in The Kathmandu Post on Wednesday, 21 July. It linked two things I care about—human rights and maternal health.

I really appreciated this editorial in The Kathmandu Post on Wednesday, 21 July. It linked two things I care about—human rights and maternal health.

It noted that the United Nations Human Rights Council has just released a statement calling on governments worldwide to ensure that women’s right to sexual and reproductive health is ensured, among other things. The paper linked that with its recent reporting about women in remote areas of Nepal giving birth at home and even in sheds!

END_OF_DOCUMENT_TOKEN_TO_BE_REPLACED 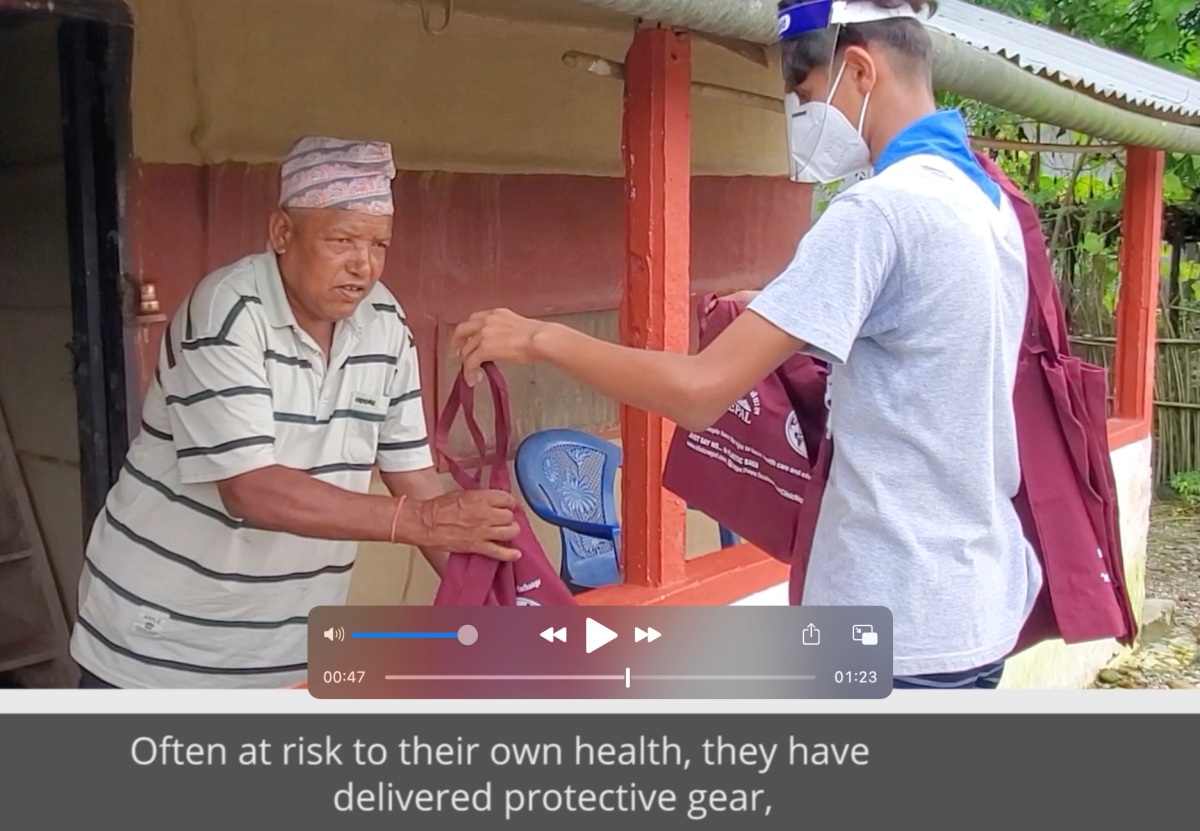 A few years ago my eyes were opened to the fact that international organizations provide only a fraction of aid that flows into countries after disasters—most of it comes from families, communities, religious institutions, local and national civil society organizations, and governments.

Yet, what I’ve seen online during the Covid-19 pandemic does not reflect that reality, at least not concerning Nepal. Here, for the past year I’ve watched individuals, including an immuno-compromised friend who is unable to get vaccinated, set aside work and family to serve hot food to needy strangers on the streets.